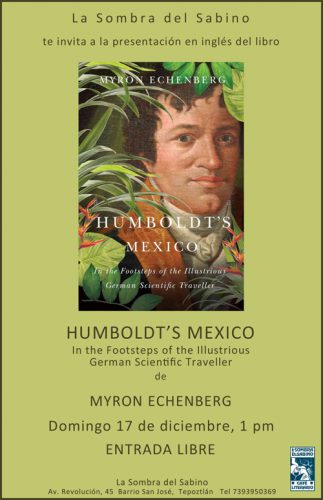 In Humboldt’s Mexico, Echenberg plunges into the lifetime of scientific studies that Humboldt packed into that single daunting year. More than that, Echenberg’s treatise involved travelling in Humboldt’s footsteps- in itself a daunting experience.

Humboldt became a major figure in the classical period of physical geography and biogeography- areas of science now included in earth sciences and ecology. Interested in terrestrial magnetism, he contributed significantly to the progress of this science, and was a pioneer in the fields of climatology, meteorology and isoline cartography. He invented weather maps showing isotherms and isobars. He was also the first to observe reverse polarity and to discover a decrease in the planet’s magnetic force from the poles to the Equator. And with his book Kosmos he made a valuable contribution to the popularization of science.

Echenberg sketches these accomplishments as well as Humboldt’s unremarkable early life. A sickly child and poor student, he was the less promising younger brother of the dazzlingly brilliant Wilhelm von Humboldt, who would go on to be a liberal politician and philosopher.